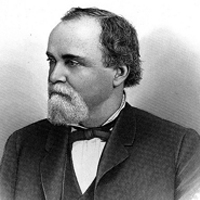 John Turner Milner was born September 9, 1826, in Pike County, Georgia and died August 18, 1898, in Birmingham) was a surveyor and engineer. As a railroad engineer, he determined the location where the South & North Alabama Railroad would cross the Alabama & Chattanooga Railroad and therefore the site of the future city of Birmingham. He also developed mining operations at Coalburg and New Castle.

Milner was the oldest son of engineer Willis Justice Milner and his wife, the former Mary Ann Turner. He attended public school sporadically, assisting his father with farming, railroad work, and gold prospecting at Dahlonega. When he was seventeen he and his father uncovered a seam thought to have been paid out. The gold was an answer to the older Milner's prayers and he fulfilled his promise to use the profits to send John to the University of Georgia.

Milner needed the remedial study to qualify for enrollment, but soon surpassed his fellow students in the study of engineering. He was forced to withdraw after three years, however, suffering from debilitating illness. Upon his recovery, he went to work for the railroad engineer George Hazlehurst as part of a survey crew for the Macon & Western Railroad. He was soon promoted to the principal assistant for the surveying of the Muscogee Railroad.

In 1842 Milner set out for Oregon and California in an oxcart and was placed in charge of the laying out of the city of San Jose by the provisional governor. He returned to the South in 1852 and resumed surveying work on the Montgomery & West Point Railroad. On December 30, 1855, he married Flora Caldwell.

In 1858 Milner was commissioned chief engineer of the projected Alabama Central Railroad which would connect the Tennessee River to the Alabama & Tennessee River Railroad which had reached Selma. The project, which was compared to Georgia's Western & Atlantic Railroad, was expected to boost the economic development of the state by opening the coal and iron produced in the Birmingham District to a wider market. Milner was charged with reporting to Governor Andrew Moore his impressions of the mineral district and its potential if it were served by rail, and with determining the ideal route and the locations of the road's terminations and crossings.

Milner's report recommended that the railroad begin near Montevallo, though political considerations forced the connection to be made several miles east, giving rise to the town of Calera. He further recommended that it terminate at the Tennessee River at Decatur and proposed a route of approximately 121 miles between them, which could be constructed at a cost of $23,000 per mile. He reported that Alabama coal could be sold at Mobile for between $6 and $8 per ton once the line was completed, and thereby make the state the primary supplier for the entire Southern hemisphere, and, once a crossing was completed at the isthmus of Panama, of the Pacific as well.

After the outbreak of Civil War, the railroad became crucial to efforts to furnish arms and supplies to Confederate forces and blockaded cities. Despite its importance, progress on constructing the line was hampered first by a shortage of labor, next by a shortage of rail, and then by a shortage of locomotives. By the end of 1863, the road was operating as far as the Cahaba River north of Montevallo, and the extension to Elyton was being surveyed. A Union detachment led by General John T. Croxton destroyed much of the railroad, including depots, bridges, and rolling stock, during Wilson's Raid in April 1865.

Once worked on the railroad resumed, Milner remained the chief engineer. It would be his determination of the route, specifically where it would cross with the Alabama & Chattanooga Railroad, thus pinpointing the center of iron production in the South. He made a pact with R. C. McCalla, chief engineer of the Alabama & Chattanooga, to purchase land at the crossing which they could develop jointly. As the agent, he purchased 7,000 acres on Village Creek, but McCalla's Boston-based financial backers, led by John Stanton, reneged on the deal. They ordered the line moved Southward and placed options the resulting crossing, which was the site where Birmingham was built. The financiers did not profit from their subterfuge, however, as Milner delayed progress on his own survey until after Stanton's 60-day option on the property expired. By that time Josiah Morris was ready to take up the option, allowing his Elyton Land Company to take charge of developing the new city.

The railroad itself was completed and turned over to the Louisville & Nashville Railroad, as an extension of their line, on October 1, 1872.

In the late 1860s, Milner also published an account of labor conditions in the state, colored by his experiences on the railroads before and after the Civil War. In it, and in later contributions to newspapers, he argued in favor of keeping African American laborers held in a semblance of bondage, a practice that became widespread as the convict lease system.

During construction of the railroad, Milner also invested in coal and timber properties along its route. He erected a sawmill at Bolling and began mining operations at Coalburg and New Castle. He sold the Coalburg property to the Georgia Pacific Railroad in 1883, earning more than $200,000 profit for himself.

In 1886 Milner joined with George McLaughlin to found the Red Mountain Mining & Manufacturing Company with plans to build an iron furnace. That same year he joined with John and Andrew Johnston, John Boddie, and Edward Tutwiler to form the North Birmingham Land Company, developers of North Birmingham. From 1888 to 1893 Milner served in the Alabama State Senate.